Thriller Live is a spectacular, high-octane show celebrating the career of the world’s undisputed King of Pop – Michael and the Jackson 5. Thriller Live marks the first Jackson’s dedicated live theatrical experience ever!

Opening at the Marina Bay Sands Grand Theatre on 3 May 2011 for a limited run of only 16 shows, Thriller Live was first established in 2006 and arrived into London’s West End after three acclaimed UK tours with standing ovations across Europe.   Six months before Michael’s untimely death in June of 2009, Thriller Live opened at the Lyric Theatre in the West End.

You can expect high-energy dancing choreographed by award-winning director and choreographer Gary Lloyd and Michael’s greatest hits from an international cast of 15 and a 6-piece live band.  Gary worked with artists such as Robbie Williams, Leona Lewis and Shirley Bassey as well as on TV and Stage shows and arena tours.  He was nominated Best Choreographer for Thriller Live by London’s Whatsonstage.com last year.

In its third year in the West End, the show pays homage to the Jackson’s legendary live performances and is packed with over two hours of Michael Jackson and Jackson 5 hits.   You can look forward to I Want You Back, ABC, Billie Jean, I’ll Be There, Blame It On The Boogie, Can You Feel It, She’s Out Of My Life, Rock With You, Bad, Off The Wall, The Way You Make Me Feel, Black or White and of course Thriller and many more.

Are you a big Akon Fan? Do you want to see him live in Indoor Stadium this January?

If you have answered yes to the above questions, go on and read some more. You might be one if the few to watch Akon live this January! 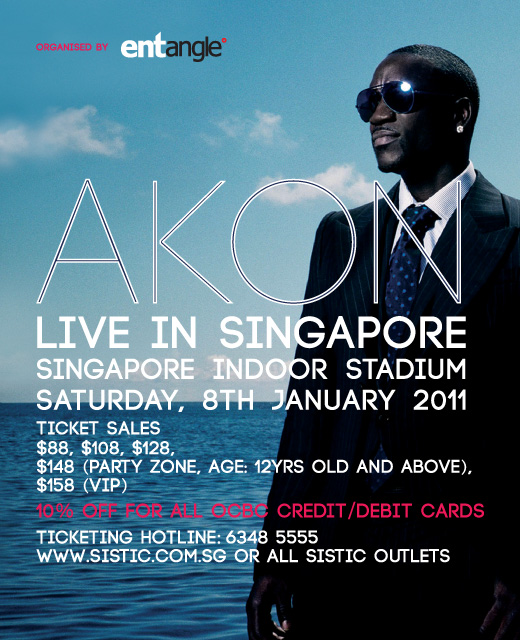 He grosses over 30 million dollars a year according to Forbes. He rose to prominence in 2004 following the release of “Locked Up“, the first single from his debut album Trouble. His second album, Konvicted, earned him a Grammy Award nomination of the single “Smack That“. He has since founded two record labels, Konvict Muzik and Kon Live Distribution.

Akon often sings hooks for other artists and is currently accredited with over 300 guest appearances and 40 Billboard Hot 100 songs. He has worked with numerous performers such asMichael Jackson, R. Kelly, Quincy Jones, Eminem and Whitney Houston. He is the first solo artist to hold both the number one and two spots simultaneously on the Billboard Hot 100 charts twice.[2] He has had 6 Grammy Awards nominations and has produced many hits for artists such as Lady Gaga, Colby O’Donis and Leona Lewis. Lady Gaga and T-Pain are two artists who were given their chance at fame by Akon. He has also released a song called “Beautiful” featuring Colby O’Donis and Kardinal Offishall which is in his hit album named Freedom which he released in 2008 and also “Right Now (Na Na Na)” in the same album.

HOW DO I WIN AKON TICKETS?

Its easy peasy. You just need to tell me why you deserve to win a pair of tickets to AKON Live in Singapore.

Here are the steps:

If you think you are lazy to write, you can also book your tickets.