Gmail Mobile by JESS3 from JESS3 on Vimeo.

By creating characters out of the familiar and favorite Gmail features, everything from the stars to the threaded conversations take on their own identity and purpose. The original marching band soundtrack sets the upbeat tone as the characters excitedly peel off from the laptop interface and confidently march their way into the iPhone browser. What took around-the-clock weeks of tender love and care into making the props and the stage transformed into an epic 30-second spot for GMAIL.

Recently 24seven communications invited me for a short N.E.mation class held at Nanyang Polytechnic where i get to learn how to animate objects to convey messages across in a more fun way.

ok, SO what is N.E.mation? Before, i go on any further and confuse you:

So, i pair up with the ever fun-loving Sidney for the workshop.

(ok, so, my SD card was corrupted, and that also with my 100++ photos from the event. I am very bumped about it, so i am using the official photos from the event and also grabbing some other bloggers photos. Sigh! So, i was hoping i can win the camera so that i wont come into such situation anymore?? Can judges????? Pleaseee……)

Sidney, looking way to serious. But i guess, thats why we are a team. I am competitive when it comes to such things.

Joshua and his instructors from Animagine were there to share with us what Animation is all about. Their passion and love for Animation have helped to nurture many artists and storytellers to tell their stories through animation. Animation is supposed to be fun, useful, able to express the theme it is trying to communicate with the viewers.

We were also told of the different types of animation and SURPRISED, we were told that we will get to try on one type of animation – CLAYMATION! Yup, clay = plasticine. It definately bring back fond memories when i was in school where i can play and create things with the plasticine!!!!!

To create a worm character and present a story via a stop-motion video at the end of the session. 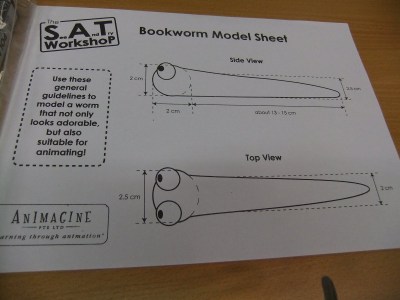 Of course, the materials and software used were well-prepared of. Other then the plasticine, we were given moulding tools to work on. On top of that, Joshua gave us a short 10minute guide on how to make a worm.

Thats my hands, creating the eyes. I was inspired by a friend of mine who has big bulging eyes, and also Colbie Callait song.. something to do with blue eyes…

And then, the animating process starts!

We have to create a storyline (or kinda) and plan how our little worm moves, or what its going to do.

Its not easy. Full co-ordination required. I was animating the worm while Sid is capturing the movement, frame by frame!

Guess what happened to our worm????

And the final results….

Cool eh??? It turned into a butterfly. That flutters. Ok, i was also Mariah Carey inspired. Her Chirstmas album in HAWT!

And there you, the graduates of the 3 hour animation workshop.

I really has so much fun!

It took us more than an hour to produce this short 6 seconds clip. A lot of effort has been put into this video and getting it done was no easy job at all, especially you need to make something dead becomes alive. Not to mention, the fun and laughter that goes with it!

So, do you want to animate something?

Before you click away, do you know that Animation plays an essential part in Singapore?

With only 300 students in the first season, N.E. Mation! has grown to attract over 2000 participants this season- N.E. Mation!5. Since its inception, over 5,200 students from 148 different schools have submitted their stories to N.E. Mation!. YEAY!!!

Several of the 45 clips produced so far have won local and overseas accolades over the years, such as the Mediacorp Viewers Choice and the Annecy Awards(it’s like Oscars in the Animation World, glam glam glam!!!)

This is my favourite clip, ‘Mingle with Lingo’ by Cresent Girls’ School which was awarded the “Prizes for Effort” in the DigiCon Award 2009. The team had used magazine cut-outs in order to produce this wonderful clip. Very localised! I like.

The theme of N.E.Mation!5: Singapore is our home.

The concept of home can mean different things to different people. It can mean a roof over our heads to just a place in our heart when we feel displaced and lost. What does ‘home’ means to this year’s contestants?

This year, out of 100 shortlisted clips from hundreds of submitted stories, the top 10 clips were chosen and will be judged by a panel of judges(50%) and open for public voting(50%).

What you can do!?

You can vote for THREE of your favourite clips in January 2011.

The Champion Team announced will be able to FLY TO USA for their award! I also want!!!! I will post more info when it comes but i guess, you can start planning on what you want to do next year so that you can also try to win this competition and fly to the US!